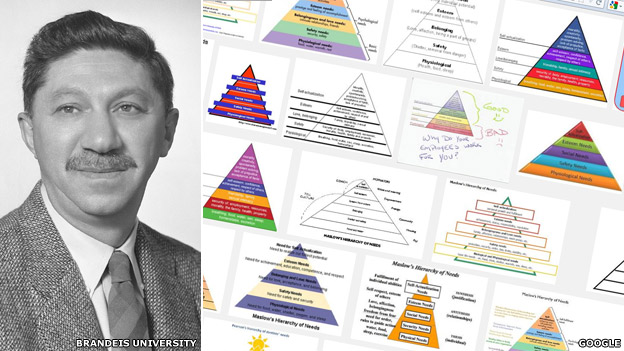 The psychologist Abraham Maslow's theory of human motivation is 70 years old but continues to have a strong influence on the world of business. What is it, and is it right?

There is a commonly reproduced symbol which many believe holds the secret to personal fulfilment and business success.

It usually takes the form of a triangle, but variants in the shape of 3D pyramids and staircases are not uncommon. It regularly appears in university psychology modules, and may pop up in other degree courses too. On management training courses it's as inevitable as biscuits and role-playing.

In 1943, the US psychologist Abraham Maslow published a paper called A Theory of Human Motivation, in which he said that people had five sets of needs, which come in a particular order. As each level of needs is satisfied, the desire to fulfil the next set kicks in.