The Defense of Computers, the Internet and Our Brains 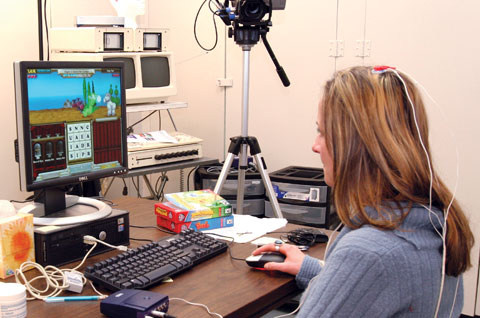 Charles Baldwin for The New York Times Several studies show that video games and the Web stimulate areas of the brain associated with memory, hand and eye coordination and attention.

If you’re reading this blog post on a computer, mobile phone or e-reader, please stop what you’re doing immediately. You could be making yourself stupid. And whatever you do, don’t click on the links in this post. They could distract you from the flow of my beautiful prose and narrative.

This is the alarm currently being rung by some in the bell towers of technology.

There is a lively discussion and some concern that computers, the Internet and multitasking are extracting a mental price.

Nicholas Carr argues in his book “The Shallows,” that the Internet, computers, Google, Twitter and the like, are making us into shallow thinkers and the neurocircuitry of our brain that long form reading creates is critical for society to function. Mr. Carr thinks that the Web, with its colored hypertext and endless abyss of bite-sized morsels of information, is making us stupid.

And although there are plenty of others in this camp, there are some who argue that not only are our brains just fine on the Internet, but they are indeed better off for it.

Steven Pinker, a cognitive scientist and professor of psychology at Harvard, argues on the Op-Ed page in Friday’s New York Times that the current outcry is nothing new. The same was heard, he writes, after the invention of the printing press, newspapers, paperbacks and television. Now, the fear stems from PowerPoint, search engines and Twitter.

Professor Pinker points out that our brains are intended to be rewired and learn new things. It’s the way we are built:

Critics of new media sometimes use science itself to press their case, citing research that shows how “experience can change the brain.” But cognitive neuroscientists roll their eyes at such talk. Yes, every time we learn a fact or skill the wiring of the brain changes; it’s not as if the information is stored in the pancreas. But the existence of neural plasticity does not mean the brain is a blob of clay pounded into shape by experience.

Jonah Lehrer, author of “How We Decide,” also argues that our brains are likely just fine on the Internet. Mr. Lehrer, a former neuroscientist, writes on his blog, The Frontal Cortex, that “given this paucity of evidence, I think it’s far too soon to be drawing firm conclusions about the negative effects of the Web.”

In a recent blog post Mr. Lehrer notes that the evidence critics use to attack the Web could be used to argue that we shouldn’t even walk down a city street as the cognitive load is far too great for our brains to handle. He notes that a in 2008, a group of scientists from the University of Michigan engaged in a study that showed walking led the brain to see a “dramatic decreases in working memory, self-control, visual attention and positive affect.” Mr Lehrer writes:

When people walk down the street, they are forced to exert cognitive control and top-down attention, and all that mental effort takes a temporary toll on their brain.

Based on this data, it would be easy to conclude that we should avoid the metropolis, that the city street is a hazardous place.

Then there is the reality that our brains, the tool that you, the reader, are currently using to decode these symbols and understand what they mean, has still not evolved to naturally learn to read: reading is an unnatural task that we still need to train our brains to learn.

Maryanne Wolf, the director of the Center for Reading and Language Research at Tufts, and author of “Proust and the Squid: The Story and Science of the Reading Brain,” notes that our brains were never actually designed to read. In a blog post last year on The Times blog, Room for Debate, Ms. Wolf wrote:

After many years of research on how the human brain learns to read, I came to an unsettlingly simple conclusion: We humans were never born to read. We learn to do so by an extraordinarily ingenuous ability to rearrange our “original parts” — like language and vision, both of which have genetic programs that unfold in fairly orderly fashion within any nurturant environment. Reading isn’t like that.

Ms. Wolf, who is concerned about the effects of the Web on children, recently explained in a phone interview that although our brains are not designed to read, the act and process children go through when decoding letters and narrative is an imperative part of a child’s development and thinking.

Ms. Wolf points out different media have value. “I’m not saying other mediums and technologies are not good for the brain, research shows that they are,” she said, “but we must understand the use of visual auditory narratives so we don’t neglect the role of the reading circuit.”

Research shows that each medium offers its own positive attributes: Neuroscience has shown that playing video games stimulates areas of our brains that control working memory, hand and eye coordination and attention and can stimulate and vastly improve our cognitive skills. Reading on the other hand promotes deep thought and exercises areas of the brain responsible for reflection, reasoning and critical analysis. And auditory storytelling stimulates areas of the brain involved with creativity, contextual thinking and executive function.

It could be argued that the Web, which is the ultimate library of words, video, images, interactivity, sharing and conversation, is the quintessential place to learn.