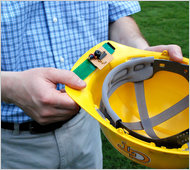 Using only radio waves for its electrical power, the SmartHat has a beeper that alerts the wearer to dangerous construction equipment nearby.

Go to your Portfolio »

What’s unusual, however, is that the hat’s beeper and microprocessor work without batteries. They use so little power that they can harvest all they need from radio waves in the air.

The waves come from wireless network transmitters on backhoes and bulldozers, installed to keep track of their locations. The microprocessor monitors the strength and direction of the radio signal from the construction equipment to determine if the hat’s wearer is too close.