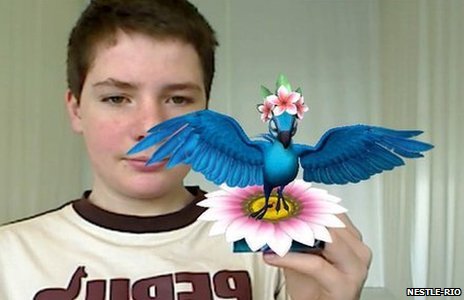 Still not very used to having a full-size car jump out at you from a billboard?

Or seeing a building you pass on your way to work suddenly crumble to pieces - only to be rebuilt seconds later?

Such realistic 3D content, once constrained to four cinema walls and seen via clunky glasses, is starting to pour from pretty much anything with a screen.

More and more businesses are embracing the technology, using 3D for adverts on giant screens and cereal boxes, or by helping you pick furniture through an immersive online 3D experience.

It is also appearing on mobile devices - the first 3D advert has recently been launched for the iPad.

Despite being around for decades, companies are constantly looking for new ways to make customers relate to 3D.

TVs, cinemas, and more recently digital billboards in airports and bus stops have all been bombarding users with three-dimensional content.

But some firms have more innovative solutions to try to engage the viewer.

Nestle, the Swiss food and nutrition company, used the help of a French firm Dassault Systemes to engage people with… a cereal box.

Equipped with a box of Chocapic cereal, you type in the internet address provided and turn on your webcam. 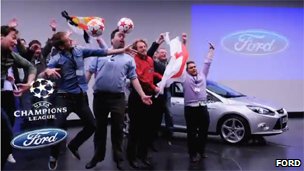 You are then directed to a page featuring characters from an animated 3D film Arthur and the Revenge of Maltazard.

Holding the box in front of the computer, all of a sudden you see yourself on the screen as in a mirror - but the box in your hands comes to life and transforms into an augmented reality game console.

As you tilt the box, the technology detects your movements in real time - and you can play a game on the screen.

Using a tag that you cut out from the back of a cereal box, you can make the 3D bird interact with you - and even feed it by tipping the tag to "fill" a bowl on the screen.

"The Rio campaign has made a lot of buzz internationally and especially in Latin America and the US," says Mr Tayoubi.

A similar idea of combining the web and 3D occurred to another well-known firm - the car manufacturer, Ford.

Producing a 3D advert is more expensive than producing a 2D ad, but the impact the activity has had internationally has made it worthwhile ”

During the Uefa Champions League tournament in London in May, Ford, together with a communications agency Imagination, decided to create original 3D videos.

The idea was inspired by a slow-motion scene in the film the Matrix, where the main character Neo successfully dodges bullets.

For that, the car firm used 40 cameras to capture the moment in 120 degrees, creating a freeze-frame video that looked like the camera was moving around a still 3D image of people "suspended in motion".

"We wanted to create something fun to do, something people would want to share, and what was inspired by camera technology in the car," says Mark Jones, European sponsorship manager of Ford, referring to the cameras installed in the new version of the Ford Focus model.

"Our objective was to have around 25,000 views of the films that were created.

In cyberspace, depth and perspective can also be achieved in a different manner.

Mydeco is an interior design firm which lets consumers visualise their home in 3D when buying new furniture - and see just how that new red sofa would actually look.

Having uploaded a floor plan, you can then move the walls and drag and drop furniture from different shops.

It all happens in real time, and the screen updates almost instantly as you put your computer-generated table into your online dining room. 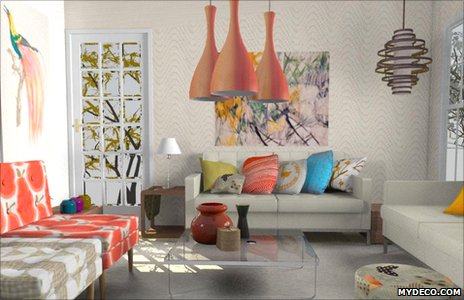 The site works with businesses, too.

One of the biggest US furniture retailers, Design Within Reach, uses Mydeco's online tool on their website, featuring furniture from their store.

"We try to be the 'Google Maps' of interiors online," says Mydeco CEO Nicole Vanderbilt.

"Our tool is very much real-time 3D. You're designing in 3D and dragging and dropping real world products that we've had modelled in 3D into your room."

One of the most common business uses of 3D is digital signage.

We project onto a transparent holographic screen, and that transparency allows us to create depth in the eye of the viewer”

And when it comes to choosing a 3D display, firms have more than one option to pick from.

First, there is stereoscopy.

This technique uses two cameras, one for each eye, to create to separate 2D images that are then combined in the brain to give the illusion of depth.

For the image to be in focus you have to wear special glasses - just like during a 3D film.

When CBS Outdoor installed a huge high-definition 3D screen at Grand Central Station in New York, it had to distribute some 70,000 3D glasses to passers-by for them to see the effect.

To add more style to often dull-looking and uncomfortable 3D glasses, certain brands have even created sunglasses that can be worn outside or used to see 3D content on a home TV screen or in stores.

But can you really expect many shoppers to walk into a shopping centre and don their glasses, however trendy they might be?

Some businesses that do not think so decided to go glasses-free.

Their solution was auto-stereoscopy, with the most common approaches being parallax barrier and lenticular technologies.

The first method involves placing an actual barrier on top of an LCD panel. Pixels for left and right eyes are then filtered, with no overlap.

There is a catch, though - you can only see the effect from a certain spot.

So if somebody is standing next to you, they will not see it - not very useful if you want to show the image to a crowd strolling past your shop.

The lenticular technology is slightly different.

The perception of depth there comes when a series of strips are interlaced at different angles, and there are more of those "spots" from which you can view the effect.

Diamond jewellery brand De Beers used the second method to advertise their diamond rings. In a campaign devised by Holition and Pointy Stick Films, the jewellery was shot from eight different angles to ensure the 3D effect had a wide field of view on screen.

"Producing a 3D advert is more expensive than producing a 2D ad because it is more complex to film and edit, plus the display technology also costs a premium," says communications director Jennie Farmer.

"However, the impact the activity has had internationally has made it worthwhile."

Finally, there are holograms.

And if giants like Sony and Samsung are pushing their way through with stereoscopic and auto-stereoscopic solutions, holographic 3D has so far mostly been supplied by smaller firms.

One, for instance, is HoloFX, a small Canadian company based in Toronto.

In holographic 3D, the depth is behind the object - a totally different effect from stereoscopic 3D where objects are "flying" towards you.

"We project onto a transparent holographic screen, and that transparency allows us to create depth in the eye of the viewer," explains the company's head Jeffrey Moscoe.

"You don't need glasses. You can stand anywhere and see it - and our effect doesn't make you feel nauseous."

One of the latest features of 3D displays is the touch interactive - when the image spins before your eyes and you can rotate it or flip it upside down.

With all the different 3D concepts around, the market seems ready for innovative 3D content.

In the years to come, what seemed sci-fi just a decade ago could finally become a reality. 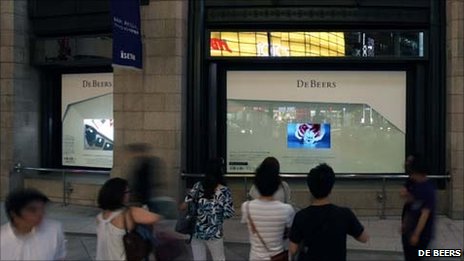