Whenever you make a snip, Snip!t looks at the contents and tries to work out what kind of thing it is. If Snip!t recognises your snip, it makes suggestions of what actions you might want to do with it.

while browsing a web page you select and snip a postcode

the Snip!t window appears and below the snip are a number of 'Actions' that you might want to do with a postcode - look up local news, get a map of the area, etc.
NOTE: these actions are often links to third party web pages, we try to choose useful and accurate sources, but cannot guarantee quality or correctness.

the actions are also available from the View Snip page (from mySnip!t). For example, this is a snip of a date: 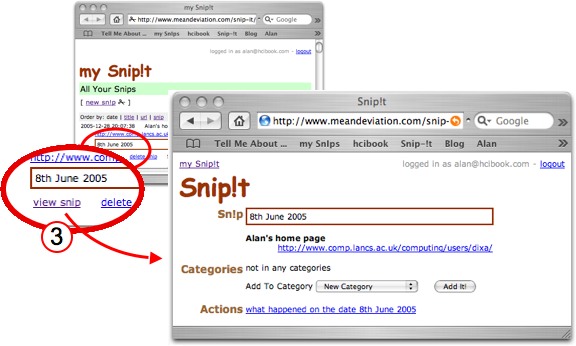 Try it out, see what Snip!t makes of the following:

If you are an existing Snip!t user, just go to your mySnip!t page.

If you are a new Snip!t user, please:

Note: unlike many web sites, Snip!t allows several users to be simultaneously authenticated on the same machine, although only one is 'active' at any time. To change users, simply logout and then at the login page select 'make active' against the user you want to log in as.